The idiotic and offensive to some e-card featuring a picture of a woman dressed like a flapper reaching out with the words “Vote like your lady parts depend on it” was featured on Barack Obama’s official tumblr blog page. 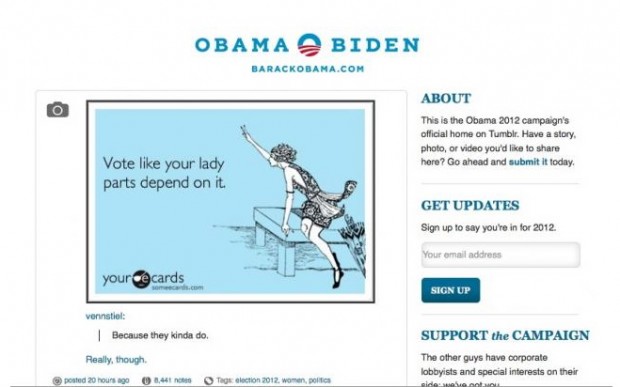 The good news is at least one person has a brain at the Obama campaign office, since the image has been scrubbed from the site. Thanks to The Weekly Standard we can still view a screen shot of the original.  Much of the lip service from the left has to do with a fictional Republican “war on women,” a tactic used to distract rather than focus on the issues that effect all Americans.

Stephanie Cutter, President Obama’s deputy campaign manager recently declared that women don’t care about the last four years.  Obama and his cronies would like it if women were dumb and were only interested in abortion and contraception.  Women can see through the B.S. and realize that the greater threats to their freedom from this administration is on religious beliefs, their personal finance, and more importantly the freedom of free choice. The fact is the Obama economy has been especially hard for women, over the past four years more women have struggled to ﬁnd work than at any other time in recorded history.  Women account for 92.3% of the jobs lost under Barack Obama making him the President with the worse record of women’s participation in the labor force.

Women want the same thing as men:  a growing economy and a government that does not bankrupt us or encourages a life of dependency.  Barack Obama does offer the women of America one thing that Mitt Romney and Republicans do not, an official Obama 2012 Hijab.