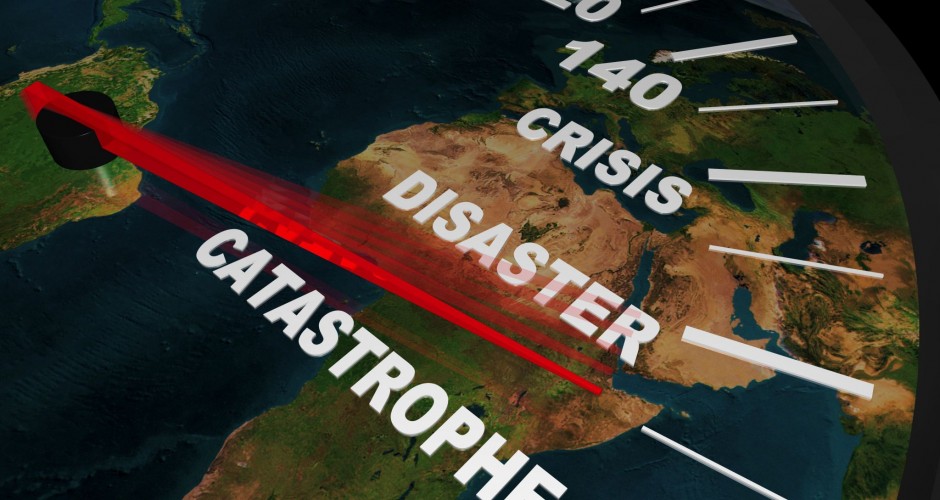 Almost every week there’s a story in the news about a huge hurricane, earthquake, fire, or flood.  While there’s no way to tell ahead of time when a disaster will strike or how bad it will be, we can still prepare.  One of the best things we can do now to help protect ourselves and our families is to make an emergency plan and get ready.  The more we are prepared now, the better chances we will have for living through and recovering from a future disaster.  While these natural disasters have a devastating effect of those individuals directly affected, a looming global economic collapse will affect us all and it may be closer than you think.  The following is a video public service announcement from the U.S. government:

While the government should be viewed as untruthful at best, I do think they are trying to tell us something.  Today, everyone agrees that the federal government spending more than it collects in revenue is unsustainable.  The Tea party’s position is firm and open on its commitment of smaller government and to end deficit spending.  Liberals understand the principles of living within our means too, they are just either too cowardly to act responsibly or the idea of bankrupting our country falls perfectly into their redistribution of wealth ideology.  The Left’s political leaders agree that our current deficit will bankrupt America.  Barack Obama on the issue of deficit spending:

But now that the worst of the recession is over, we have to confront the fact that our government spends more than it takes in.  That is not sustainable.  Every day, families sacrifice to live within their means.  They deserve a government that does the same. AND We can’t keep on just borrowing from China. We have to pay interest on that debt, and that means we are mortgaging our children’s future with more and more debt.

Nancy Pelosi agreed with the President, “After years of historic deficits, this 110th Congress will commit itself to a higher standard: Pay as you go, no new deficit spending.  Our new America will provide unlimited opportunity for future generations, not burden them with mountains of debt.”  Even dirty Harry Reid realizes the problem, “Because most Americans know that increasing debt is the last thing we should be doing.  After all, I repeat, the Baby Boomers are about to retire.  Under the circumstances, any credible economist would tell you we should be reducing debt, not increasing it.”

So how bad are we, really?  Well, events seem to be moving at an accelerating pace towards the great collapse. When a government is unable to raise adequate revenue to cover obligations and result to borrowing year after year, they are, for lack of a better term, bankrupt.  At this point, they invariably crank up the currency printing presses to facilitate paying off the debt burden at a lower effective rate , creating hyperinflation.  We may not be there yet, but prices do seem to be skyrocketing.  The official government claim of inflation stands at 6.41 % since 2008 when Barack Obama was elected to the Presidency.  However, Jim Rogers called the U.S. government inflation data “a sham.”  Anyone that pays rent, buys groceries, goes out to dinner, and just about any other activity, knows that there is most definitely inflation.  As Rogers says, “Everybody in this room knows prices are going up for everything.”

The resulting financial chaos will result in a complete loss in the purchasing power of the U.S. dollar; a collapse in the normal stream of U.S. commercial and economic activity; a collapse in the U.S. financial system, as we know it; and a likely realignment of the U.S. political environment. Outside forecast envision this senerio for 2014, but recent geopolitical conflict in the Middle-East may have accelerated this movement towards this fiscal cliff.  Our debt is being monetized and inflation is ramping up.  The following graph of Federal Reserve notes versus gold gives a suggestion of how the markets have been discounting the mounting U.S. fiscal and dollar problems since at least 2000. 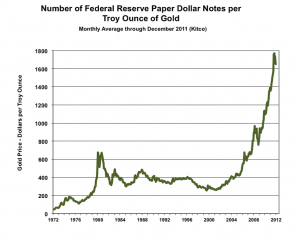 The aggravating thing is we have put ourselves in this kind of situation before and we should have learned from our previous experience.  The problem is that after two generations we have forgotten and are now repeating the mistakes of our grandparents.  Before the Progressives began to take root in America there had not been a formal depression.  This all changed when Franklin Roosevelt was faced with the Great Depression.  When FDR was unable to stimulate the economy from Washington, he abandoned  the gold standard completely thereby adopting a fiat currency system – where the government effectively could print and spend whatever money it wanted to create.  When the FED was created and politicians began to interfere with the free market restraints that the gold standard imposed on the economy, inflation and deficit spending began and have not stopped since.  The effect of the post-Roosevelt policies has been a slow-motion destruction of the U.S. dollar‘s purchasing power, down by 95.6% since the gold standard was abandoned in 1933.

Yet, the Obama Administration and many in Congress have not shown the political will to address the nation‘s long-range insolvency, hoping to push-off the day of reckoning for the economic and systemic solvency crises until after the 2012 presidential election.  However most believe that neither President Obama, nor Republican hopeful Mitt  Romney can do much to help revive the American  economy.  In an interview  with The Fiscal Times, Rogers who thinks the global economy is headed for “financial  Armageddon” and thinks the American debt problem is overwhelming, said  people shouldn’t expect the election to change much:

As far as I’m concerned, the election is  irrelevant. One [candidate] happens to be from Boston and one from Chicago, and whoever wins,  their friends are going to do well, but other than that America is not going to  do well. There’s very little difference in any of these guys. None of them  understands the problem. These are the guys that got us into trouble. You expect  them to get us out?

With no viable or politically practical way of balancing U.S. fiscal conditions and avoiding this financial economic Armageddon, the best action that individuals can take at this point remains to protect themselves, both as to meeting short-range survival needs as well as to preserving current wealth and assets over the longer term.   Building a store of key consumables, such as food and water, buying physical precious metals, and purchasing a firearm are all suggestions from “Rich Dad, Poor Dad” author Robert Kyosaki.  The potential economic collapse could lead to one of the fastest and sharpest redistributions of wealth in financial history.  If you see the  waves coming and are prepared, you can change  whether you are one of the victims or one of the beneficiaries.  It will be a wild ride, but bugoutalley will help prepare you for the enormous windfall profits that will become available for many millions of individual citizens.