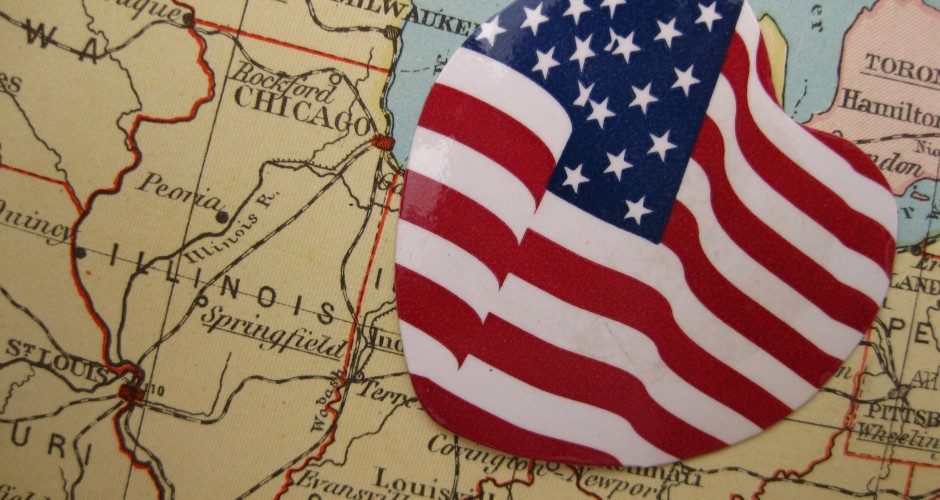 Barack Obama’s home state and the location of his campaign headquarters should easily go to the incumbant President in the November 2012 election.  Illinois is not considered a swing state by any means; it is seen as solidly blue, and has been for the past two election cycles.  However, a new poll shows that the President Barack Obama train is losing steam.  A poll conducted by Illinois-based pollster and political strategist Michael McKeon found Obama leading Republican Mitt Romney by 49 percent to 37 percent in Cook County.

This is significant because Cook is not only the most Democratic leaning county in the state, it is also the most  populous.  These numbers do not bode well for the president.  He needs a far greater margin on victory if he expects to carry the state as a whole, as he is only polling in the forties in downstate Illinois.  In the city of Chicago itself, Obama maintains a 60-29 lead over Romney, but the Republican challenger leads 45-38 in the surrounding areas.  Across the county as a whole,  Romney leads 43-31 among independent voters, a 44-38 lead among male voters, and a 53-40 lead among white voters.

What is even more significant is hope that maybe the people of Illinois are waking up.  The liberal run state has amassed a $103 billion pension crisis.  If Illinois is not totally broke already it is certainly well on its way.  The state government has now quit paying even the most essential bills.  It spends three dollars for every two dollars that it takes in.  The state of Illinois now ranks eighth in the world in possible bond-holder default.  That is actually one spot ahead of the state of California.  As much of a mess as California is, Illinois is in even worse shape.  Every major rating agency has downgraded Illinois debt, and Illinois now pays millions of dollars more to ensure its debt than any other state in the nation.

The problem of corrupt Chicago politics effectively controlling state policy is so bad that a state Republican legislator has even introduced a bill to the Illinois General Assembly to separate Chicago’s county from the state–effectively making the midwestern city the 51st state in the union.  The bill, filed by State Rep. Bill Mitchell of Decatur Tuesday, would “enact legislation dividing Illinois and Cook County into separate states” because county residents “hold different and firmly seated views” on “politics, society, and economics” from people in the rest of the state. The bill’s supporters point to higher tax rates and strict gun laws in the Chicago area and contend that the northern county is out of step with its Illinois neighbors.

Illinois is a mess.  Back in 2006, the unemployment rate in Illinois was only about five percent,  today it’s more like 11 percent.  Large corporations have moved tens of thousands of jobs out of the state and Illinois ranks in the top ten nationally in home foreclosures.  Illinois is just another example of the rampant corruption and mismanagement that go hand-and-hand with liberal politicians.   In fact it seems like almost every place where a liberal political machine has been entrenched for decades (Illinois, California, Detroit, etc.), the local governments are now facing financial nightmares of unprecedented magnitude.  It is worth noting that the ten most bankrupt states in the country right now are run by liberals.

It’s unlikely, but maybe the people of Illinois will do what they havn’t done since 1988.