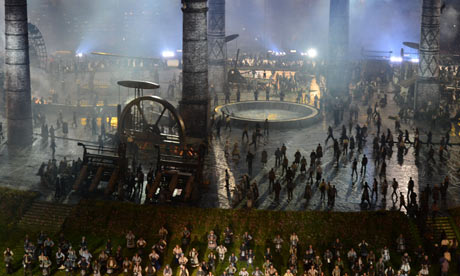 Stonehenge is a prehistoric monument, built by a culture that left no written records, located in the English county of Wiltshire.  Many aspects of Stonehenge remain subject to debate and the structure remains one of the mystery’s of the ancient world.  What would future archeologists think if they unearthed the giant baby head that was on display during the opening ceremonies of the London summer Olympics?

The opening ceremonies  were the creation of the athesists-socialist, English film director and producer, Daniel Boyle, best known for his film Slumdog Millionaire.  British Labour politicians and Lefties worldwide hailed the Olympic opening ceremony as a “socialist” event and “the best advert for the party for years.”  They loved the Progressive socialist sentiments that featured working class history, multiculturalism, socialized health care, gay kissing, at one point featured a symbol popularised by the Campaign for Nuclear Disarmament.  Some claim the central theme was the assumption that the industrial revolution was oppressive.

He kicked off with apple-cheeked villagers prancing round the May-pole and frolicking in their feudal rural idyll, but then came the sound of ominous drums. To everyone’s horror, giant menacing, smoking factory chimneys started to rise up from the land.  In the background, the moaning romantic Blake was doing his Dark Satanic stuff, while the BBC commentator laid it on thick about wicked industry disfiguring the landscape and cruelly up-rooting everyone. Platoons of dirty, sad workers trudged into the arena to remind us how awful industrial progress is.

I was still reeling from this extravagant display of dim-brained left-wing history, and looking in vain for any mention of Newton, global trade and so on, when suddenly whole wards of hospital beds were wheeled on…with three giant flaming letters…NHS

Watch the National Healthcare Services part for yourself,  keep in mind – It’s far more bizarre than you think.

The problem is the British abysmal Soviet-style health service is that it is an abject failure and should illustrate the inherent problem with the big government Statist left.  Foreigners are appalled by Great Britons grim, dirty hospitals, the lazy health workers, the dire cancer-survival rates, etc.  Even most advocates of a single payer universal health care system would NOT use the British model of an example of success, rather one of failure.

This list could go on and on, but the facts are that socialized health care DOES NOT increase the quality of care and DOES NOT decrease price.  While our government and U.S. Supreme Court continue to trample the Constitution and drive us closer and closer to universal health care, the Canadians are doing just the opposite.  The Canadian Supreme Court recently ruled that the government must stop restricting the private sector from providing health care when the national system (frequently) fails.  Their Chief Justice Beverly McLachlin wrote, “Access to a waiting list is not access to health care.”

Maybe it is time we start looking around the world and seeing the result from socialism and communism.  Our neighbors to the North have been down that road and have been adopting more conservative policies over the past decade.  Guess what?  Their per capita wealth has surpassed America’s for the first time in history.