Warning: file_get_contents(http://tinyurl.com/api-create.php?url=) [function.file-get-contents]: failed to open stream: HTTP request failed! HTTP/1.1 400 Bad Request in /home/content/21/8866921/html/wordpress/wp-content/plugins/tiny-url/tiny-url.php on line 35
 So, why does the FED have near zero interest rates if the economy is improving? | Bugout Alley

At the latest Federal Reserve board meeting, the consensus is that the U.S. economy is improving (HUH?) and interest rates will remain at record lows.  Well, that makes sense-banks are loaning money to individuals at low levels too, between 4-5%.  The Federal Reserve must be loaning money to central banks at a similar rate, right?  WRONG!  The FED has kept short-term interest rates at or near (0-.25%) zero since 2008, and promises at keeping them there until at least 2014.

What’s the problem with this situation? INFLATION!  It’s a good thing that one of the jobs of the Federal Reserve is to control inflation.  They state that the official inflation is about 3%.  That number does not seem to jive with what most folks are experiencing in their wallets.  Inflation rates do fluctuate a bit when you factor in such “luxury” items like gasoline, heating fuel, and food.  If we calculate the consumer price index the way the government did before 1980, we would have an inflation rate closer to 10%.

The FED is devastating the lower and middle classes intentionally.  See for yourself.  The Federal Reserve Bank of San Francisco has even developed a game for school children to see the effect that interest rates have on the overall economy.  Play the game here (lower interest rates to near zero like we have done for six years).  http://www.frbsf.org/education/activities/chairman/index.html.

We are in bad shape, and we need to change course ASAP.  The first step to recovery is admitting you have a problem.  Every American can agree that Greece has some major economic problems.  Take a look at the graph below as it illustrates the per capita national debt. 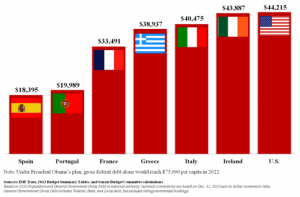 Yeah, we are worse than Greece.  Even though Ben Bernanke and President Obama insist that the economy is improving most economist are predicting another quantitative easing program by the federal government.  So, another 500 billion Q3 is needed to prop up a failing economy.  This is only a temporary fix, and will ultimately only increase inflation and make the impending fall that much worse.  We need a drastic change in direction and in leadership.  Ron Paul as Vice President or Secretary of the Treasury and an audit of the Federal Reserve seems like a good start…